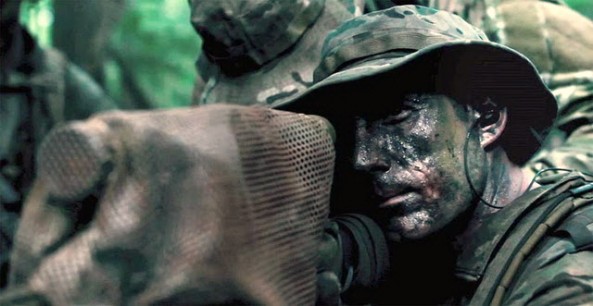 The controversial, but government-approved ‘Act of Valor’ is the latest film to tackle the subject on the war of terror. This time, however, we witness real-life SEALS playing fictitious SEALS. It’s as if the filmmakers are telling the audience that a war film with a Hollywood cast automatically strips the picture of its authenticity. I don’t think so – ‘The Thin Red Line’, ‘Platoon’, and ‘Apocalypse Now’ are just a few of the many great films in the war genre. ‘Act of Valor’ should have had “WE WANT YOU” as its tagline because the picture feels like a 2-hour recruitment video. The metric that will be used to determine the film’s success won’t be the tomatometer on Rotten Tomatoes, or the total dollar figure it rakes up at the box office. The key data point here will be the number of SEALS recruits. Did the number of British Secret Agent applicants increase significantly when ‘Casino Royale’ was in theatres?

A team of six Navy SEALS are sent to the Philippines to rescue a CIA agent who has been kidnapped. Prior to her kidnapping, she was investigating a connection between a terrorist, Shabal, and an international smuggler, Christo. In the process of the rescue mission, the SEALS discover that Shabal is plotting an attack against the United States with a new, horrific weapon. The SEALS are then tasked with the mission of locating Shabal, as well the 16 suicide bombers he is sneaking into the Mexican-US border. The suicide bombers are equipped with vests filled with gel explosives. Shabal’s plan is to have them detonate their vests at strategic points throughout the United States, causing media panic, and further plunging the American economy.

The real life Navy SEALS who are essentially playing themselves are unquestionably brave, honourable men. However, there is only about two sentences of back story for these characters. Of the two main characters, one is a family man who likes to surf, and the other has a pregnant wife at home. As believable as the SEALS are, they do often struggle with reciting lines of dialogue. I don’t know if I can blame them for this – they aren’t trained actors. But, what about the SEALS as characters? They collaborate perfectly, free of discord. They stick to the plan but are able to adapt when necessary. They don’t even seem to curse unless they’re under attack. Nor do they question the value of the cause. And this is why ‘Act of Valor’ feels like propaganda. The film doesn’t examine the complexities of war – there are no corrupt officials, nor are there any psychologically damaged soldiers.

What ‘Act of Valor’ does have is action, and lots of it. These cast members were involved in sensitive, high-stakes, real-life missions, and I think this gives the action sequences, which essentially consists of a series of rescue missions, an aura of authenticity. This goes for the level of detail involved in their planning, their methods of avoiding detection, and their frequent use of military jargon. That being said, I don’t know what the heck a “hot extract” is and I suppose most civilians will be as lost as I was during the moments of military speak. The characters in this film have access to a wide range of modern weaponry and while what’s present is credible, it also robs the film of some of its tension. The SEALS have the upper hand in terms of firepower and logistical support. It’s the equivalent of cheering for the house during a poker tournament.

‘Act of Valor’ is one of those movies that is easier to appreciate than enjoy. As we watch this film, we’re reminded of the men and women sacrificing their lives so we can enjoy the freedoms we take for granted. It’s an admirable attempt at providing an accurate depiction of who the SEALS are, and how they work. As a film, it has some pretty impressive mission sequences, but it also has underdeveloped characters, stilted dialogue, a cloying score, and simplistic view of the war. The most unsettling aspect to yours truly is how every frame of ‘the movie felt like it was trying to convince the audience to join the military. As you can probably tell, I can’t recommend ‘Act of Valor, so my recommendation is to skip it and rent the criminally underrated ‘Green Zone’ or the Academy Award-winning ‘The Hurt Locker’ instead.