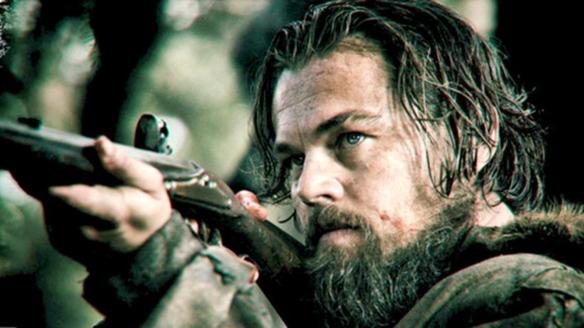 The Revenant is the one that got away. Had I seen it a week earlier, it would have been on my Top 10 Films of 2015 list. In order for a film to have a 2016 Oscar-qualifying run, it had to be released in New York and Los Angeles before December 31st, 2015. So 20th Century Fox, exhibiting an NY/LA bias, opened the picture in these two cities on Christmas Day, and everywhere else January 8th. We’re not even halfway through January, but my personal Top 10 of 2016 list already has a slot filled.

The Revenant deserves to be seen on the biggest screen with the best sound system possible. Even with a 70 inch 4K television and Bose speaker system, watching this one at home won’t match the experience of seeing it in a theater. The incredibly talented Alejandro G. Iñárritu, who won last year’s Best Picture and Best Director Oscar for Birdman, dazzles us with amazing visuals and creates an immersive experience that thankfully doesn’t require the viewer to put on a pair of 3-D glasses. This is one of the most beautiful, viscerally exciting, and (contradictorily) stark and haunting films I’ve ever seen.

The MPAA gave The Revenant an R-rating for “strong frontier combat and violence including gory images, a sexual assault, language and brief nudity”. This description could have continued for another paragraph. The intensity of the violence cannot be understated – it is brutal, gruesome, and relentless. The damage an arrow can do to a body is penetratingly detailed (no pun intended). Following the single-take wonder of Birdman, the great cinematographer Emmaneul Lubezki (who won the last two cinematography Oscars for Birdman and Gravity, and may very well win a third consecutive one for his work here) gloriously shoots the opening battle in one take, his camera swooping and circling and tracking the assault as one man after another falls to his death. But, this isn’t violence for the sake of violence – Iñárritu wants to show us just how severe frontier life was nearly two hundred years ago.

Inspired by true events, and adapted in part from Michael Punke’s 2002 novel, The Revenant showcases Leonardo DiCaprio in one of his most remarkable performances as American frontiersman Hugh Glass who in 1823 worked as a scout for fur trappers playing their trade. Along with his teenage, half-white, half-Pawnee son, Hawk (Forrest Goodluck), he leads a team of trappers including Andrew Henry (Domhnall Gleeson), John Fitzgerald (Tom Hardy), and Jim Bridger (Will Pouter). After a surprise shoreline attack by Arikara Indians leaves many dead, the survivors escape downriver.

As Glass embarks on his own scouting mission into the forest, he comes across a cub-defending grizzly bear that attacks and severely wounds him. The melding of special effects and actual stunt work is breathtaking here. Within this single-take sequence, Glass is squashed, his skin torn apart, his bones crushed and it all appears so astoundingly real. How did they do that? I mean, did a bear really maul DiCaprio? This is what we mean by movie magic.

When the others find Glass, they try to transport him via stretcher but as they slip and slide through the snowy and rocky terrain, they soon run out of favourable options. Three men volunteer to stay with Glass until he dies so that he can get a proper burial.
Glass is left for dead in an awful act of betrayal. Our mauled hero nurses himself back to health, and continues to persevere against sub-zero wilderness conditions for hundreds of miles so that he can exact bloody revenge and get justice.

I’d say DiCaprio is currently the frontrunner for winning that elusive Best Actor Oscar for his role here. If he does win, it isn’t going to be a consolation prize for the previous five times he was nominated and didn’t win; it is because he deserves it. DiCapro is so physically committed to the role – his natural charm and charisma buried beneath an icy beard, a bloodied body, and his marred wheezes forms a verbalization of its own. He isn’t given a whole lot of dialogue to work with (of course, there isn’t a lot of talking one can do with no one else around). It’s a compelling, raw, and forceful performance.
Tom Hardy may very well be my favourite actor working today and I’m glad the Motion Picture Academy gave him a Best Supporting Actor nomination for his terrific work here. He should be nominated for every movie he is in. Take a look at his recent roles – Mad Max: Fury Road, Locke, The Drop, and Legend. He’s nearly unrecognizable here, and though he is the villain in this story, there are layers to his character and we believe that this ex-soldier may have once been a good man with a clear sense of right and wrong. But one look into his eyes now and all we see is ruthlessness.

I wasn’t sure where Iñárritu was headed after Birdman but it is a pleasure to see him return to a more serious mode of filmmaking. He saw a transcendent tale in Glass’ journey and went to preposterous lengths to cinematically tell this story. Aside from the picture’s superb technical qualities, what I greatly admire about The Revenant is how seamlessly it combines its virile frontier era revenge thriller plot with the whispery, meditative tone a la Terrence Malick. It is defiantly its very own thing – simultaneously a big budget spectacle and an art-house experience. QED.