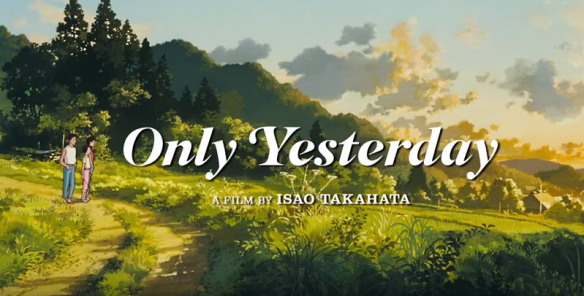 ‘Only Yesterday’ will likely go in the books as one of the better films of 2016 as far as North American release dates go. It is actually a 1991 Japanese animated film that has sat on the shelf for the last 25 years. GKids has released both a new English dub (with Daisy Ridley from ‘Star Wars: The Force Awakens’, and Dev Patel), and the original subtitled version (which is the one I saw).

‘Only Yesterday’ is Isao Takahata’s follow-up to his World War II masterpiece ‘Grave of the Fireflies’ from 1988. It’s hard to believe he didn’t get an Academy Award nomination until just last year for ‘The Tale of Princess Kaguya’ (which ultimately lost to ‘Big Hero 6’).

Takahata’s story is as universal as life itself. A 27-year-old Tokyo woman, Taeko, vacations to the country to work on her cousins’ small farm. The trip brings back grade-school memories. An early 1990s Hollywood picture of this sort would be dripping with sentimentality. And yet, ‘Only Yesterday’ unfolds at its own deliberate pace, inviting the viewer into a contemplative world. Takahata finds the pathos in moments of self-discovery and ordinary moments.

The plot shifts between 1982, when Taeko stays at the farm with her host family, and 1966, when she’s a fifth grader. The 1980s scenes pop out of the screen with expressive detail. The 1960s scenes, by contrast, consist of unoccupied backgrounds and washed-out colors. It’s as if we are prying into someone else’s childhood memories, which explains the lack of detail – what we mentally catalogue isn’t entirely absolute.

Being unmarried, Taeko faces pressures to find someone (“27 is too old to be picky.”) but Takahata keeps the film locked in her self-examination, as she can’t escape the feeling that her fifth-grade self has joined her on the trip. Her childhood memories, which we see in flashbacks, aren’t that different from our own memories of childhood: the impressionable school play that she starred in, the awkwardness of her first crush, her first taste of pineapple, her relationship with her demanding father, the intense student council debates over lunchroom rules, the time she failed her fractions test (dammit, Takeo, when you divide A by B, you take A and multiply it by the reciprocal of B!).

‘Only Yesterday’ reminded me of my favorite movie of all-time, ‘Tokyo Story’. Even the opening credits are similar – with Japanese characters set against the simple background of a tatami mat. In ‘Tokyo Story’, an elderly couple takes a long train ride from their village in southwestern Japan to post-war Tokyo to visit their grownup children. In ‘Only Yesterday’, an unmarried woman takes a long train ride from Tokyo to the countryside in northern Japan. There is a simplicity to the surface qualities of both pictures but underneath it all lies an economic, ecological, psychological, and socio-political commentary that transcends its time and place and approaches something universal.

Though Walt Disney has released a number of Studio Ghibli features over the last twenty-plus years, it isn’t hard to understand why they didn’t release this one. This meandering story about a young woman trying to figure out what she wants out of life and how she wants to live will leave many children feeling restless. There is also a long segment in ‘Only Yesterday’ where fifth-grade girls learn about menstruation – not the sort of stuff a studio like Disney wants in their family-friendly movies.

Takahata’s breathtakingly beautiful and keenly observant film, which was based on an autobiographical manga series by Hotaru Okamoto with art by Yuuko Tone, sneaks up on the viewer and leaves a major imprint. Taeko hits a point of realization about her childhood behavior and where it has brought her and every moment leading up to this registers as a real lived-in experience – so much so that you may forget that you’re watching an animated feature. ‘Only Yesterday’ is no longer “the best Studio Ghibli film you haven’t seen”. You owe it to yourself to see this one. Currently playing at TIFF Bell Lightbox. QED.