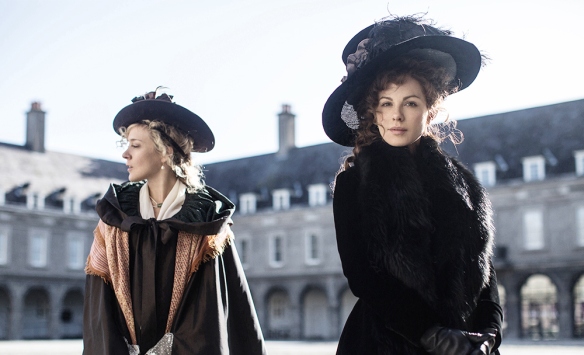 Remember the last time characters from a Jane Austen story hit the big screen? It wasn’t that long ago – on February 5th, 2016, ‘Pride and Prejudice and Zombies’ opened nationwide. Whit Stillman’s ‘Love & Friendshp’ returns to a more traditional adaptation of Austen’s work. But, unlike ‘Sense and Sensibility’, ‘Pride and Prejudice’, ‘Mansfield Park’, and ‘Emma’, most viewers will be unfamiliar with this story of an 18th century high society schemer. Rather than tackling one of Austen’s masterworks, Stillman opted to adapt ‘Lady Susan’, an epistolary novel that was published in 1871, more than a half-century after her death.

It’s the late 1790s and Lady Susan Vernon (Kate Beckinsale) is recently widowed and broke. What makes her unique among the author’s protagonists is her immeasurable cantankerousness. She is an egotistical, contriving blabbermouth whose main goal is to find fittingly opulent and susceptible husbands for herself and her daughter, Frederica (Morfydd Clark). Lady Susan has her eyes on Reginald De Courcy (Xavier Samuel) and believes Fredrica should marry Sir James Martin (Tom Bennett), a man she does not reciprocate feelings towards. She confides all of this to her American friend, Alicia Johnson (Chloë Sevigny), whose husband (Stephen Fry) keeps threatening to move back to America for “business” reasons that, of course, would have nothing to do with wanting to get as far away from Lady Susan as possible.

Austen initially wrote ‘Sense and Sensibility’, and ‘Pride and Prejudice’ in epistolary form before converting them to traditional narratives in later drafts. ‘Lady Susan’, however, remained in its epistolary state, which means Stillman uses the characters and plot from Austen’s fictionalized letters to conceive a lot of this sharply penned dialogue filled with witty zingers.

This is the role of Beckinsale’s career and she is clearly having a blast wearing the garb of the time, and gushing some deliciously unsparing dialogue. Sevigny, however, is completely out of her depth – she looks like someone from 2016 that just stepped out of a time machine. A largely unknown actor named Tom Bennett steals the show. He is outstanding, and his Sir James Martin is one of the most gloriously dimwitted characters the cinema has ever known – he is right up there (or down there) with Harry and Lloyd from ‘Dumb and Dumber’. This is a star-making performance. Hollywood – please give Tom Bennett some major roles!

Greatness eludes ‘Love & Friendship’. The movie doesn’t offer any insights on love or friendship. ‘The Art of Deception’ would be a more fitting title. Structurally, the plot resembles something of a caper, but the question as to whether or not these characters will be swindled by Lady Susan isn’t an entirely compelling one (though it is amusing). The period details aren’t as lush as one would wish for a picture of this sort. ‘Love & Friendship’ doesn’t have much resonance. I saw it Saturday afternoon, and haven’t given it a moment’s thought until I wrote this review. Nevertheless, the dialogue and the performances from Bennett and Beckinsale are more than enough to give ‘Love & Friendship’ a qualified recommendation. QED.