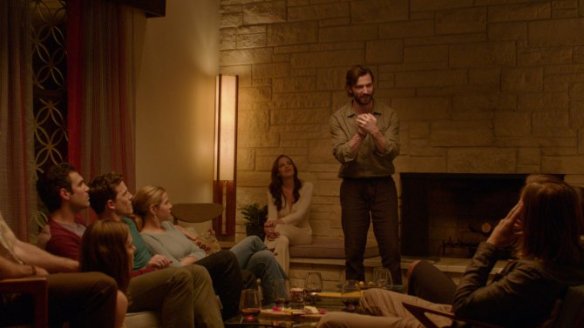 I really hope none of you have ever attended a dinner party like the one in ‘The Invitation’. Director Karyn Kusama, whose varied filmography includes ‘Girlfight’, ‘Aeon Flux’, and ‘Jennifer’s Body’ has crafted an elegant slow burner that asks us to be patient in the early stretches. But, that patience will be greatly rewarded and you’ll be treated to one of the most enthralling final shots in recent memory.

This dinner-party-from-hell plot will be at its most appetizing if it remains unspoiled so I’m going to keep plot details to a minimum. Bearded hipster Will (Logan Marshall-Green) and his girlfriend Kira (Emayatzy Corinealdi) receive an invitation to a dinner party hosted by his ex-wife Eden (Tammy Blanchard) and her new husband David (Michiel Huisman). Will and Eden haven’t seen each other since their relationship disintegrated two years ago as they struggled to cope with the accidental death of their young son.

The guests are mostly old friends of Will and Eden though Will does notice a couple new faces. Approximately 94% of the movie takes place in and around Eden and David’s jazzy mid-century modern home (which used to be Eden and Will’s home); the city of LA looks beautiful through their windows. The food looks great. The couple appears to have expensive taste in wine. It looks as if Eden is back on her feet and Will can’t understand just how she was able to undergo such a transformation following their shared loss.

If you want to find out what her secret is, you’ll have to see ‘The Invitation’ for yourself. I can’t go any further. Credit screenwriters Phil Hay and Matt Manfredi for the picture’s inscrutable structure – this screenplay is populated by characters in varying states of bewilderment, bereavement, and cynicism. We put our faith in a character that has been established as a sensible frame of reference only to realize that he or she has been discredited in terms of providing a reliable perspective. The credits for these two writers include ‘Ride Along’, ‘Ride Along 2’, ‘R.I.P.D’, ‘Clash of the Titans’, and ‘The Tuxedo’ – ‘The Invitation’ suggests that there are better days ahead for these two if they continue to churn out screenplays of this quality.

Kusama uses this simple setup to establish a sense of mounting dread that will linger for the duration of the picture. She expertly maintains the perfect tone throughout – the entire film vibrates with understated tension.

The real star of ‘The Invitation’ is cinematographer Bobby Shore who makes striking use of interior spaces – in the early scenes, the couple’s home is warm and alluring but as the film progresses, it becomes increasingly claustrophobic and daunting. Conversations are shot in intense close-ups concealing key pieces of visual information that exist just outside the frame. Phillip Blackford’s atmospheric sound design is crucial – pay close attention to the sounds coming from outside of the house; all your questions will be answered by the film’s last shot.

Your mileage may vary. Some viewers won’t respond well to a thriller that shamelessly exploits a sensitive subject like the death of a child and its messy aftermath, especially one that seems to be lacking an emotional center. Others may find that the picture spends too much time establishing the setup. But if you’re willing to accept the movie on its own terms, you’ll find that ‘The Invitation’ is a skillfully executed slow-burn thriller.

For whatever reason, ‘The Invitation’, which opened stateside in April, didn’t receive a theatrical release here in Canada. It is, however, currently streaming on Netflix Canada, and it will be released on Blu-Ray July 26th. Though 2016 hasn’t been a particularly strong year for cinema, there have been some very intelligent chillers: ’10 Cloverfield Lane’, ‘The Conjuring 2’, ‘Green Room’, ‘The Wailing’, ‘The Witch’ – ‘The Invitation’ is every bit as good as those terrific titles. QED.