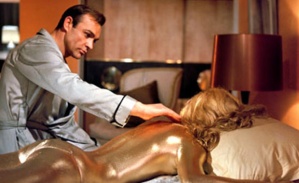 1) ‘Goldfinger’ (1964)
‘Goldfinger’ was my introduction to the 007 character, and remains unsurpassed by its successors and its many imitators. I can’t defend it as great cinema but it is great fun, establishing the template for all of the Bond films that followed: a highly inventive plot, cutting-edge gadgetry, beautiful women, classic villains, sly humor, exotic locales, and gargantuan set pieces. The picture has arguably the best encompassment of Bond (Sean Connery), the best villain (Auric Goldfinger is one for the ages), the best Bond Girl (Oh My God, Honor Blackman!!!), the best henchman, and the best car (The Aston Martin DB-5). Oh, and that theme song!

2) ‘Skyfall’ (2012)
I actually reviewed ‘Skyfall’ when it opened in 2012. Here is an excerpt from my blog post: This is a very different Bond picture – one that is driven by developing its characters, and exploring the relationships between them as opposed to taking place in the gadget-filled live-action cartoon universe that this series seems to occupy. Yes, the babes, the cars, and the exotic locales are all present, but when I think back to ‘Skyfall’, it’s the characterizations that stand out for me. There’s a vulnerability to Craig’s version of Bond that makes him more compelling and helps create a rooting interest that I haven’t felt since the early Connery pictures.

3) ‘Casino Royale’ (2006)
‘Casino Royale’ was the first of the Bond pictures to star Daniel Craig. Gone is the cartoonish absurdity of the Brosnan-era; the ice hotel from ‘Die Another Day’ has melted away. This one functions more as an origin story (appropriately so, given that ‘Casino Royale’ was Ian Fleming’s first 007 novel). This isn’t the 007 we knew from decades before and I’m told Craig’s portrayal is more inline with Fleming’s creation – this is a man who is shattered by his job, and this level of impressionability (coupled with gritty stunt work a la Jason Bourne) is what has come to define this reincarnation of the classic character.

4) ‘On Her Majesty’s Secret Service’ (1969)
Yes, ‘On Her Majesty’s Secret Service’ is the George Lazenby one. Most fans of the series probably won’t have this title on their Best Of lists. And while I admit that Lazenby is stiff and lacks the charm Connery so effortlessly brought to the role, I have to say this is the first of the Bond pictures where I actually cared for the characters and felt as if things were at stake. I was very much moved by that shockingly abrupt, emotional ending. Of the 12 Bond pictures scored by John Berry, this was the very best one. Easily the most underrated entry in the series.

5) ‘From Russia With Love’ (1963)
‘From Russia with Love’ is the second movie in the Bond series, and at this point, Connery had mastered his character. It is a much more accomplished work against its predecessor, ‘Dr. No’. This is the one that begins the tradition of using a main title song. I always thought this plot involving the search of a Russian decoding device was particularly brave given that Cold War tensions were high during this time. In terms of plotting, this is one of the most tightly knit in the series. It’s also the one that Sean Connery, Timothy Dalton, and Daniel Craig have cited as their personal favorite 007 picture.